This month’s Bonus Recipe was selected by Rebecca, of Ezra Poundcake. It seems to be a month for grilling, and Rebecca’s choice was no exception: Grilled California Pizzas. We love pizza in this house, so I make it frequently. I’ve never grilled one, though, and sadly, this one didn’t get grilled either because I don’t have a grill. My old one was too dilapidated to make the move several years ago, and it was never replaced, so I was forced to bake the pizza in the oven. The other major change I made was using my own pizza dough recipe. It is nearly identical, so I felt that it made little difference, and it is even quicker. I will post the recipe separately for those who are interested.


I divided the dough into quarters to make 4 small pizzas.

I goofed on the first two and forgot to add the arugula, but in a way, those turned out better. The arugula came out somewhat bitter after baking, so, although it adds color, I would probably use spinach next time and save the arugula for a salad. Oh, and I used feta instead of goat cheese. While my daughter loves goat cheese, I abhor it. I’ve tried and tried to like it, but to no avail. So, feta it was.

The step-by-step process follows. We thought the pizza was colorful and delicious. Since I’m not a huge fan of pizza sauce, I thought these were great! 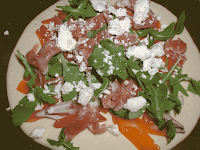 Wow, that looks great! I'm glad you did the bonus, even without a grill. You can never have too many pizza recipes. ;)

That looks great - and thanks for the dough recipe. And one idea I have seen - you can scatter the arugula on the pizza after baking - it wilts a little but doesn't develop such a bitter taste.

oh wow, your pizza looks so good. i just made these tonight and loved them!