I make my living reading books, all non-fiction, so having a few stolen moments to enjoy a novel is, well, novel.

A friend had recommended A Gentleman in Moscow, by Amor Towles.  I put my name on the library's waiting list, and after months and months, it was finally my turn.  I had just three weeks to squeeze in a 400+ page book!

A few other friends had only made it as far as the second page, then put it aside, but I persevered, and was well rewarded. 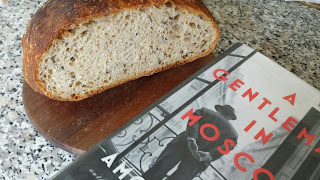 The primary character is Count Rostov, who has been declared a Former Person by the new Bolshevik regime, and placed under house arrest/exile in the Metropol Hotel in Moscow.  Additionally, he is forced to move from his suite to a 100 square foot room at the top of the hotel.  The novel is an account of the Count's philosophical acceptance and survival during the decades that follow.  In the hotel, he makes friends with and becomes part of the staff, and also makes friends with various hotel visitors.  Food is a part of the scenario, especially since the Count eventually becomes Head Waiter.

Occasionally, a long-time friend stops by, and during one particular visit, this friend is visibly upset because changes have been requested to his manuscript on Chekhov, a passage relating to bread.  Years later, the friend leaves a book in the Count's care, a collection of literary passages about bread.

Since I am a bread baker, that was what I had to make.

I chose a bread that I make on a weekly basis:  a simple no-knead bread that is proofed overnight, then baked in a piping hot Dutch oven.  Each time I make this bread, I make small changes.  For this iteration, I added emmer flour, sesame seeds, and nigella seeds.  The resulting bread had a nutty flavor and a nice, open crumb.

The original recipe can be found here.  It can also be found in Book 3 of Good Eats.

I should say that I enjoyed the book, and was a bit sad when I finished it.  Because I studied Russian and Russian history in college, names and locations were also familiar, so perhaps that made a difference.  I hope that you, fellow reader, will give this sweet novel a try.

Whenever I have the opportunity, I do my best to participate in Simona's Novel Food event.  Find information on the latest edition on her blog.  She will post a roundup in the next few days.

I can, actually, bake bread that turns out near-perfectly  -- brown crust, open crumb, great flavor.  I do this at least once a week, experimenting with flours and flavorings.

I explain this, because, once again, my June bread for the Babes has failed.  Oh, it looks fine on the outside and has a tangy flavor, but if one were to throw it at an intruder, and if it were to connect with said intruder, that individual would be knocked out cold.

The experience began on a promising note.

I revived my dormant starter.  It looked fine, smelled fine, and was all nice and bubbly.

I picked fresh lemons and tangerines from my backyard trees.

I used the emmer flour that I had purchased at a local, artisan bakery.

I used a seed mixture that I found at Trader Joe's.

All ingredients came together nicely, although there was little evidence of a rising dough.  That should have been a red flag.

But, I continued on.

Because of my initial disclaimer, I know I can bake bread.  I've been doing it successfully for decades.  Clearly, there must be a weak link among the ingredients.  I suspect it is the starter.

Before I condemn it to the compost bin, I have been experimenting with a different process.  Stage one was successful; stage two had mixed results, but I did take the stage two #2 starter and refresh it.  Stage three seems viable.  Tonight I have created a biga, using the stage three starter.  In 24 hours, or so, I will see if that works, then continue on to the next stage.  If it works, terrific.  If not, it's back to square one and a new process.

All that aside, the other Babes had great success with the June recipe.  All their breads look beautiful, outside and inside.

Cathy, at Bread Experience, was the Kitchen of the Month.  You can find the recipe for Pain au Levain on her website.  You still have time to bake this loaf and submit it to Cathy for the Buddy roundup.

Also, be sure to check out the results from the other, successful, Babes.