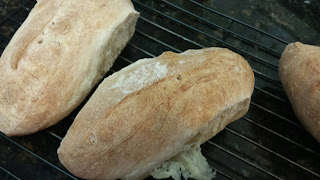 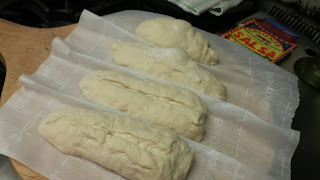 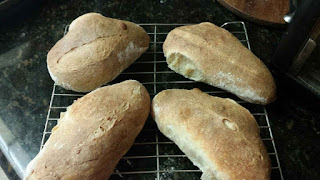 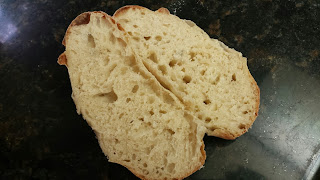 
It’s time again for the summer edition of Novel Food, hosted by Simona of briciole.

Since the libraries have been closed for months, I had to rely on my personal library for reading material.   I chose one book to re-read, “A Year in Provence,” by Peter Mayle, hoping it would provide inspiration for a recipe. Or so I thought.  As I read, I kept thinking that I didn’t remember the text.  The joke was on me.  I had never read this particular book, although apparently, I’ve read another one of his books on Provence.  There was some relief that I wasn’t going crazy (yet).

Although there wasn’t a lot of mention of food in this book, there was a passage describing coq au vin.  I began by checking my wine supply.  All whites, with one exception, and that was the wrong kind of red.  So, I began searching for variations on the recipe.  There is coq au vin blanc, which does use white wine, coq au vin Riesling, and also coq au vin champagne.  Success!  I had some leftover champagne in the refrigerator, the right amount, and it was still fizzy.  (Don’t ask me how long it’s been in there!)  In addition, I also discovered a recipe using the Instant Pot, so I was set.  In the end, I used about four different recipes, taking the best of each and merging them into one.  I also added some Courvoisier cognac (one of those small sampler bottles).  Even though I didn’t burn off the alcohol, the cognac did add a nice depth of flavor to the sauce.  The end result was a delicious coq au vin that I enjoyed for several days. 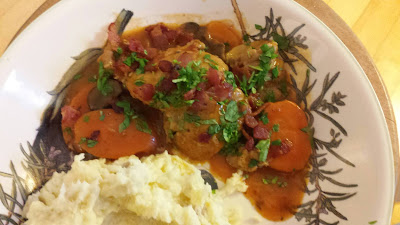 I’m looking forward to making this delicious chicken dish again, now knowing that I can use different kinds of wine.

As for the book, I enjoyed the descriptions of the seasons and of the cast of characters that populated this area of Provence.  One tip, which I will have to try, is to use lemon juice to get rid of ants.  Not that want to encourage ants to come, but, if they do, I’ll be ready, and it will be a good way to use the lemons that drop from my tree.
Posted by Judy at 7:33 PM 2 comments: