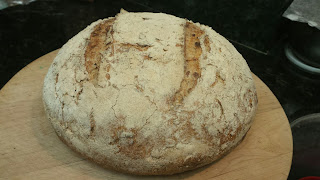 Every bake is an adventure in learning.  Let’s take this month’s bread baking challenge as an example.

I didn’t have the wheat chops, so I doubled the amount of wheat germ.

I couldn’t get the starter to float, so I delayed an extra 24 hours to no avail.  In the end, it didn’t seem to matter as the final bread came out just fine.  After some research, however, I learned that the starter needs to be tested at the peak of its rising time, about 3-4 hours after feeding.  Then, it floats!  I made some simple sourdough loaves to test this theory with good results.

Unless you want to be baking the bread at 3 am, it’s a good idea to feed the starter in the afternoon, then make the dough in the evening so it can rise overnight.  The final shaping and rise can then be done in the morning.   (Unless you want to bake in the middle of the night, of course.)

While I used the basket to proof the final shape, I was concerned that it would deflate after I dumped it into the hot Dutch oven.  Once again, upon further research, I realized I could use a piece of parchment and a board to flip the loaf,  then use the parchment to lower it into the Dutch oven. That should have been a no-brainer.

Despite all of the issues, the loaf turned out well, and I would be willing to make it again, improving upon the experience from the first loaf. 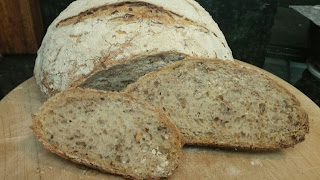 For the recipe, detailed instructions, and fascinating discussion on Toasted Oats Bread, head over to Elizabeth’s blog.  If you bake and post by January 29th, you, too, will be included in the Buddy roundup.