The Tale of Many Loaves


At first, I wasn’t planning on participating for this bake, since I didn’t have any sourdough starter at hand.  (Being the infamous starter killer that I am, my previous starter met its demise last August from the dreaded pink slime.)  However, I concluded that I had the time to start again, and I wanted to prove my critics wrong, so a new starter was born.  It was a success, and is still viable even as I write this.

Once the starter was ready, I studied the recipe for Pain Tordu, did a bit of research, then plunged in.  My first thought was that a 10 hour proving time must have been a mistake!  Surely, it would be overproofed!  None of the recipes I found suggested a 10-hour time frame.

So, Pain Tordu #1 had about a 2-hour proof.  It baked up nicely, although the crumb/texture was tiny.

Since I still had plenty of time before the reveal day, I decided to experiment.
By the way, this dough is just lovely to handle, and is worth using no matter how it is shaped.

(I discovered that my main/guest bathroom gets nice and toasty when the door is closed.  My starter lives in there, and it has become my go-to spot for rising bread.  The room is rarely used, so it’s a safe place.)

To continue, #2 kept its shape, and had an improved texture.

#3, however, had spread a lot (confinement is suggested), but did have a more open, porous crumb.  Perhaps that was purpose of a 10-hour proof.

As a last experiment, I purchased a baguette pan, and Pain Tordu #4 was created.  Instead of the twist, I put the 4 baguette-like loaves in the new pan, then placed it in the proving room for 10 hours.  The loaves still spread, and they were definitely overproofed because they collapsed when I moved them.  I ended up with four flattish loaves that had great texture, but were still disappointing. 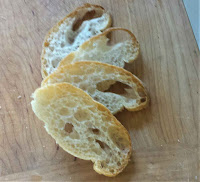 There must be some compromise rising time between 2 and 10 hours.  It’s a great dough with good flavor, but 10 hours just results in a disappointing loaf.

For the dough alone, I would certainly suggest giving this month’s bread a try.  The Kitchen of the Month is Elle of Feeding My Enthusiasms.  If you decide to join us, please send Elle your photos and link by the end of the month.