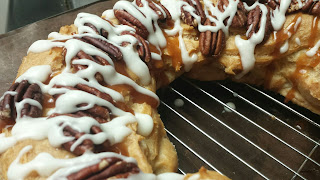 December’s challenge was refreshingly uncomplicated.  Elle, of Feeding My Enthusiasms, the Kitchen of the Month, decided we needed less stress in our lives during this busy time of year.  Her choice, King Arthur Flour’s Butter Pecan Kringle, was simple to prepare, festive, and delicious.

I made the caramel sauce and roasted the pecans ahead of time.

Next, I prepared the base (basically, a pie crust), then the topping (choux pastry), then assembled it all on a baking sheet.

The final touch, after the kringle has baked and cooled, is a simple glaze across the top.  I used rum extract for my flavoring, because that is what I had.

This kringle is an excellent choice for holiday parties, and would be perfect for a special breakfast.  Experiment with different flavor combinations – you can’t go wrong!

Go to Elle’s blog for the recipe and a nice history of the kringle itself.  If you bake one by December 29th, you can qualify as a Buddy.  Just let Elle know.

Check out the other Bread Baking Babes:
Posted by Judy at 6:19 PM 5 comments:

October’s Kitchen of the Month was Kelly from A Messy Kitchen.  The target bread:  Apple Bread with Cider and Calvados from Swedish baker, Jan Hedh.

Every challenge, I begin with good intentions.  Will this be the month I do it correctly?  Will the dough behave?  I’ve come to realize and accept that there will always be some deviance; that my bread will be not be perfect, not like everyone else’s.

I began by researching the recipe and looking for alternate ingredients.  I found the original recipe, in grams, so proceeded from there.  Not having dry cider, I substituted champagne.  It’s been in the refrigerator for quite a while, so I figured this was a good use for it.  (Don’t judge me – my alcohol supply has been known to last for decades.  Good thing it doesn’t spoil.)   And, while I should probably invest in some calvados, knowing it will last a life time, I substituted boiled cider.

Instead of the overnight proofing of the polish, I did the four-hour version.  I did, however, run out of time in between the first and second proofing for the dough, so I did put in the fridge for an overnighter.    All was well in the morning.  I had also set the cooked apples aside overnight.  They were reluctant to be incorporated into the dough, so situated themselves along the edges of the loaf.  Pockets of apples.

The dough rose enough, and had great oven spring.  It actually turned out fine; definitely one of a kind.

Head over to Kelly’s blog to get the recipe and see how beautiful her bread is.  Also, check out the efforts of the other Babes.

Or, pull-apart bread, if you will.  Interactive bread is much more fun to say and do.

This month’s recipe was provided by Kitchen of the Month, Elizabeth, from Blog from Our Kitchen.

While the original recipe called for wild sourdough starter, I was, sadly, unable to comply.  The starter that began in March met its untimely end in early August with an attack of the pink funkiness.   Care and feeding of a new batch just didn’t seem economically feasible for just one or two tablespoons, so I opted for a yeast-based version that I found on the King Arthur Flour website.

I also steered away from cutting out circles, in the interest of time (which is precious little lately), and did a strip and stack method.

Overall, I’m pleased with the outcome.  I’ve been wanting to make this style of bread for quite a while now, so I didn’t want to pass up the chance.  A very minor issue occurred when I took the bread out of the pans:  the loaf began falling apart, section by section.  That didn’t affect the taste, of course, which is delicious.

If you’re looking for a fun bread to make, please give this a try.  You can find Elizabeth’s recipe on her website, or use the same one I did from KAF.  Either way, it will be delicious.

Stop by the other Babes' websites to see what they did.