Time again for another edition of Novel Food, hosted by Simona of briciole.

A few months ago, the public libraries became accessible again.  No in-person visits yet, but we can request a book online, and pick it up at our local branch.  I’m lucky enough to be able to continue to work, but in-coming projects have slowed down, allowing me more time to read and cook.

The first book was As the Pig Turns, An Agatha Raisin Mystery, by M. C. Beaton.  I was familiar with the Agatha Raisin series from British television, but it was my first time reading one of the novels.  It is very light, escapist reading, a good thing in these challenging times.  Based on the title, I thought there would be some discussion on food, but that wasn’t the case.  (The pig turned out to be a policeman.  On a spit.)  There was, however, one description of an awards banquet.  I wasn’t sold on chicken and mashed potatoes, but there was cheesecake for dessert, so that became my first choice. 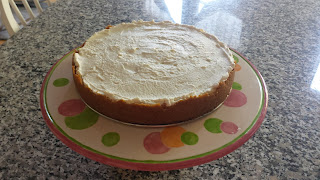 But, I decided to try one more book, hoping for some kind of food that would grab my attention.  Next up was The Life and Times of the Thunderbolt Kid, by Bill Bryson, one of my favorite authors.  This was a memoir about his childhood in Iowa.  There were more foods mentioned, but usually in the context of single items:  licorice or cottage cheese, neon ice cream or baked goods, fried chicken or junk food.  Not necessarily easy to translate into a usable recipe. He did mention a few local restaurants and their specialties.  I almost went with banana cream pie from the Toddle House, but when he spoke about Johnny and Kay’s and their cheesecake, I knew it was a sign.  So cheesecake it was.

This is a simple recipe for sure.  Make the crust.  Make the filling using cream cheese, sour cream, eggs, sugar, and vanilla.  Bake for 20 minutes.  Let sit in the oven for an hour.  Remove and cool.  Then, spread the top with whipped cream, and chill overnight.  That was the most difficult part!  Waiting!  It was, however, delicious for breakfast.  One change I would make:  I’d use more graham crackers for the crust as it was a bit skimpy. 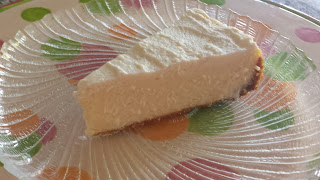 I was familiar with many of the cultural experiences that Bryson described in his memoir, so we must be from the same generation.  One of my favorite lines was about fig newtons.  “Their idea of a treat was to pass around a plate of Fig Newtons, the only truly dreadful cookie ever made.”  I cheered!  (Which is why I never recommend his books for bedtime reading.)  Never liked them and I still don’t.
Posted by Judy at 5:17 PM

Mmmm, cheesecake! This one sounds really good (it may rival my favourite version, Ruth Reichl's New York Cheesecake in her book "Garlic & Sapphires") We also have a no-bake cheesecake that is pretty darn good - and very very easy. Instead of using crushed Graham crackers to make the bottom layer, we use crushed chocolate wafers. And yes, a slightly thicker bottom layer is best to have a nice contrast of textures. (Do let me know if you neeeeeeed the no-bake recipe....)

Ah, one of my favourite authors: Bill Bryson! Try reading his books out loud and see how many sentences you can read without collapsing to gasp with teary eyed laughter.

But I disagree about fig newtons. While they're not my favourite, I quite like them. On our family summer holidays, there was always a choice fig newtons or squashed fly biscuits (I had to google just now to learn that the cookie is really called a Garibaldi biscuit...). Now THAT is one of the two only truly dreadful cookies ever made! Others may disagree vociferously, but the other one is {brrrrr} the mallowmar. Ha! A chacun son goût!

I read a book by Bill Bryson some years ago and enjoyed: you just reminded me of that. I should read more by him. Thank you also for mentioning the Agatha Raisin mysteries: I am not familiar with them. I agree with you: the most difficult part is waiting. Thank you for your contribution to Novel Food :)

You can't go wrong with cheesecake and those cozy mysteries (like the first book you mentioned) are a great escape today. Coming over from Novel Foods #40.