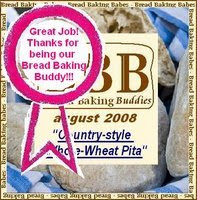 Once again it's time to participate in the call for Bread Baking Buddies. This time it's Country-Style Whole-Wheat Pita from Beth Hensperger's The Bread Bible, chosen by Bread Baking Babe Ilva, of Lucullian Delights. Can I say Yum?

It was like magic! In a span of 2 minutes I watched as the first bubble formed, then spread, then the whole pita rose up like a space ship! So cool! I’m lucky to have a window in my oven so I can stand there, with nothing better to do than watch a pita take shape.

All 8 pitas were hollow – success.

One was flatter than the rest, but I deduced that the oven wasn’t quite as hot when I put it in, so I experimented with the remaining ones, letting the oven return to temperature each time, and that did the trick.

While I’ve made pita before (I have a blackened pizza stone to prove it), these turned out the best of any, and the flavor is fabulous.

I halved the recipe, so here’s the version I used:

Combine whole wheat flour, instant yeast, pinch of sugar, salt, olive oil, and water in mixing bowl. Using the paddle attachment, mix until soft, sticky dough is formed. Slowly add the all-purpose flour, about ½ cup at a time, switching to the dough hook about half-way through.

Continue kneading in the mixer until the dough is soft, springy, moist and smooth, adding additional flour only if necessary to keep it from sticking. Dough should be slightly tacky to touch.

Lightly oil surface of dough and place in lightly oiled bowl. Let rise until doubled in size: anywhere from 45 to 90 minutes.

Pre-heat oven to 475 ° F with a baking stone set on the bottom rack. (Pita may be baked on parchment paper on baking sheets or directly on hot baking stone.)

Divide dough in half, returning half to bowl and cover. Again divide dough into 4 equal pieces and form each into a ball. Cover, allowing them to rest while forming the other half of dough.

Dust bench with whole-wheat flour, roll each ball into a 6-inch circle (may need an additional 5 or 10 minutes to relax gluten if dough resists rolling). Let rest on peel or floured dish towel or floured parchment paper, covered until puffy, about 15 to 20 minutes. Since I could only bake one at a time, I rolled out the first 4, then rolled the remaining ones while the first batch was baking.

Baking time: 10 to 15 minutes (on parchment paper baking sheet will take longer than on stone). (Each of mine took about 7 minutes to bake, so be sure and watch.)

Do not check and open oven door for the first 4 minutes!

Pita are done when fully puffed and light brown.

I'm so jealous! Only half of mine puffed :( Yours look wonderful.

I will definitely have to make these!

They look great! I am so happy you like them, I just found an Israeli recipe of pitas that I just have to try!!

Out of 16 I had two flatliners.. it's all in the game I suppose. ;-)
You did great, and they look yummy!
Thanks for being a Buddy

They look wonderful! And even if some won't puff, you can eat them with wonderful stuff (as Tanna showed us)

Can you say YUM?
Judy you can say YUM and Gorgeous YUM!
So happy you baked with us.