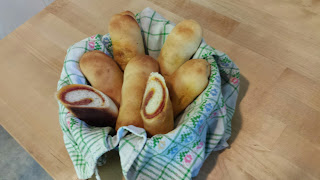 West Virginia Pepperoni Rolls – I guess it’s a “thing.”  Who knew?  The January Kitchen of the Month is Elle of Feeding My Enthusiasms, and she challenged us to make this WV specialty.  They were originally created by Italian-American miners as a non-perishable lunch to take with them while working underground in the coal mines.  Many recipes include mozzarella cheese, which adds a nice, melty touch.

The dough was easy to make and delicious, but because it was an enriched dough, it took twice as long to rise. One thing I learned is that pepperoni slices come in a variety of sizes. Apparently, I chose the giant size, which were basically the size of the dough square, so I only put on two per square. 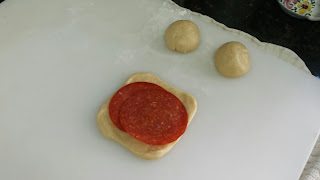 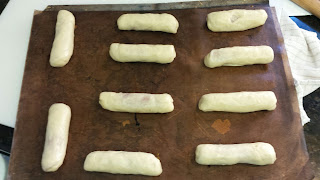 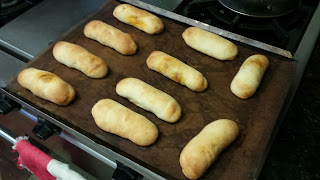 The end result was a nice combination of salty and sweet.  I bet the addition of cheese would add to their deliciousness. 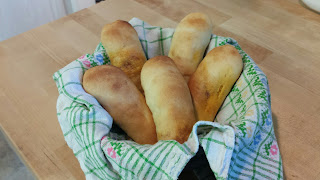 For more background and the recipe, head over to Elle’sblog.  If you want to be a Buddy, send your results to Elle by January 29th.

Judy, I laughed when I read your comment about different sizes for pepperoni. When I made mine I only had fairly large slices, but they were smaller than yours! What I really wanted were the little coins like you get on pizza, but the package of them went missing...I think my visiting nephew got the munchies one night at Christmas time. Anyway I love your rolls - they look great!

I didn't know pepperoni rolls were a thing either, but they are very tasty. I like the idea of using the larger pepperoni. Your rolls look great!

That is too funny about the pepperoni coming in all sizes. I ordered some from my local store to pickup and was really surprised when I opened the package and found 3 inch squares. I quartered them to put on pizza.
Your rolls look terrific.

I debated chopping mine up into little bits for the pockets, but I think the big pieces are good for rolling!

Ha! I always thought pepperoni was very small.... Another thing I learned with this bread. What a great lunch they will make.

I know absolutely nothing about pepperoni, but I'm thinking larger slices make for a better roll, right?

Wow!! Those ARE giant sized slices! The pepperoni that I've always seen at the deli is cigarillo-shaped. The only time I've seen slices of pepperoni is on commercially prepared pizzas.