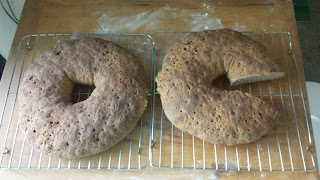 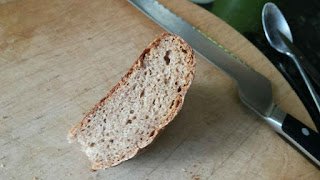 Crumb looks good! I think most of them seemed to spread more than rise, so maybe that's just how it normally is. We liked the tang too! Haven't tried it toasted yet, just plain with butter or butter and jam.

Those aren't flat at all! Your loaves look great! I loved it toasted too.

You had me at 'several types of rye flour'. Buckwheat is very common here (for crepes, of course) rye not as easy to find.Lovely bread.

I totally understand your reaction, that you first think the loaves are too flat. I had that so many times... but it's all the rye's fault!

Your crumb looks great! I'm glad you were able to revive your rye starter without any problems.

Blame it on the rye or just understand rye is a fast riser but not very high ;-) Make for most tasty bread though!

That sure doesn't look like a collapsed loaf to me! It looks beautiful!