By popular acclaim, the first cookies for July are Classic Jammers (page 350) in Dorie's Cookies.  This is a multi-step cookie:  vanilla sables for the base, streusel for the top, some kind of jam for the assembly.  I used some cherry preserves for my jam. 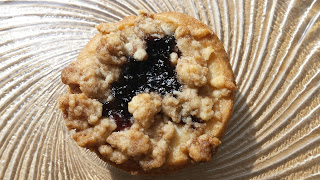 I only made half a recipe, but the streusel topping ran out before I could use up all the dough, so I baked the remainder as plain cookies.  I'm not a huge fan of jam in cookies, and I debated whether to use lemon curd instead.  If there's a next time, that's what I'll use. 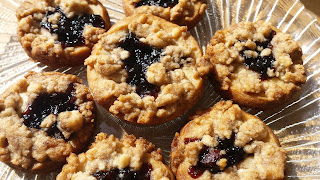 They were  pretty darn delicious, even so.

I did experiment with the baking pan.  A few years ago, a friend gave me one of those mini cheesecake pans with the removable bottoms, so the first twelve cookies were baked in that pan (the small ones in the photo).  The pan worked nicely, but the openings are deep, making it a challenge to sprinkle on the streusel.  I'm sure it would do fine for less complicated cookies.  The remaining six were baked in a standard muffin tin (the big ones), which certainly made assembly a bit easier.  Neither pan affected the taste; it was just a matter of appearance and ease of preparation.

Stop by the Tuesdays with Dorie website to see what the other cookie bakers thought.
Posted by Judy at 8:12 PM

These were delicious and my family loved them But I agree that a less complicated cookie would be better.

These were terrific, weren't they! I like the idea of using lemon curd with them, too.