The second April cookie from Dorie's cookbook is filled with the taste and scent of lemon, Lemon Sugar Cookies.  I love anything lemon, and I am fortunate because there is a lemon tree in my backyard, loaded with lemons. 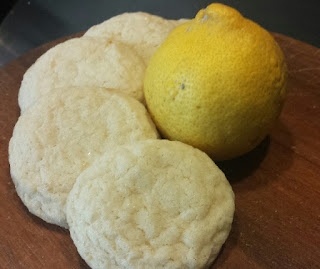 I must admit that I made these back in February, and they were a big hit with everyone who tried one.  One problem, though.  I forgot to take photos, or, rather, the cookies were eaten too quickly.  So, sigh, I was forced to bake them again.  Almost ran out the second time, too!

I didn't have too much of an issue with spreading.  Those most likely to expand were the last to be scooped out.  Maybe a bit of chilling would be helpful.

The only other thing I did a bit differently the first time was that I used the zest of two lemons instead of one.  They were really lemony.  And super delicious.

If you have Dorie's Cookies, you can find the recipe on page 171.

To see what the other bakers thought, stop by the Tuesdays with Dorie website.
Posted by Judy at 8:22 AM

I am so glad somebody else mentioned chilling the dough. It helped me get beautifully symmetric cookies.

Im jealous of your lemon tree! These were so good!

They look yummy and I'll bet they were even more fun to make and eat with homegrown lemons.

I chilled my dough when I made them too. It was so soft! So jealous of your lemon tree!

It must be nice to have a lemon tree in your backyard. These were a hit with my family too.

A lemon tree sounds so nice! We loved these cookies too!