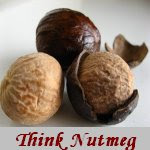 This month I finally had some time to make a dish to enter in the Think Spice event. Aparna of My Diverse Kitchen chose nutmeg, one of my favorite spices. The catch, though, was that the dish needed to be a vegetarian one. I cook vegetarian dishes at home as well as meat-based ones, so that was not difficult. However, I wanted to do a savory dish rather than a dessert, so that was more challenging.

I consulted my heirloom cookbook collection and found a recipe that sounded delicious – Creamy Mushroom Pasta Sauce. The key spice was nutmeg. Now, I thought I would make this all for myself, since my daughter was working that evening, but she came home early and was hungry, so I had to share this with her. That was unexpected. And, I have to say, it was so delicious, that we fought over the last bit in the pan. She won. I definitely will make this again.

So I offer this mushroom pasta sauce for July’s edition of Think Spice, Think Nutmeg. Thanks to Aparna for hosting and thanks to Sunita for creating this event.

salt and pepper to taste

Heat 3 tablespoons of the butter in a heavy skillet. Over medium heat, add onions to pan and cook until golden. Lower heat, and simmer, covered, for 20 minutes, or until the onions are very soft. Stir occasionally. Melt the remaining butter in another skillet. Cook mushrooms until tender; season with salt and pepper. Stir in nutmeg. Add mushrooms to onions; mix well. Keep sauce hot while pasta is cooking. Five minutes before serving time, add the cream and heat thoroughly, but do not boil. Toss the pasta and sauce together. Serve immediately with freshly grated Parmesan cheese. Makes enough for one pound of pasta.

(I cooked the onions first, then transferred them to a dish and kept them warm while I sauteed the mushrooms in the same pan. Then I added the onions back into the pan. By doing this, I had one less dirty pan.)

Judy, this looks most delicious. I ususally see recipes for savoury dishes with nutmeg are non-vegetarian.
Thank you for this vegetarian entry.

Thanks for sharing this. It's hard to find recipes where nutmeg is the star.