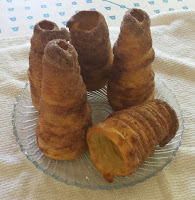 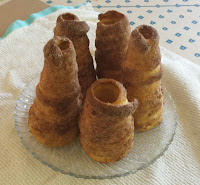 I wish I'd watched the video of how to make those cones before using the soda cans! Yours look great!

Those are great chimneys! Yours look particularly buttery and cinnamon sugary, very yum.

You know what they say ... great minds think alike. I did the same thing that you did. Fretted over what to use as a mold until I watched that video. The paper and foil molds are just perfect. I made mine the day before as well. It was actually really easy once the fretting was done. :)

Really, what more could one want? Bread, butter, cinnamon ... oh yes, coffee in the morning and wine in the evening..
Sometimes I think we just love to fret.

You are brilliant!! Of course heavy paper rolls would work AND they'd be closer to the right size than beer cans.

That's it. I'm going to keep hold of the paper rolls for our parchment paper, waxed paper and aluminum foil. They'll be perfect for chimney cakes.

I'm really happy your moulds worked for you. The Chimney Cakes look good.
Yes, I'm a sucker for cinnamon too. :)