During the last few months, I have managed to squeeze in a few novels.  Most of my reading (for work) is non-fiction, so fiction is a treat.  My most current read was Little Fires Everywhere by Celeste Ng.  It’s a story about motherhood, relationships, and secrets, and it demonstrates that seemingly simple decisions can have long-reaching impacts and consequences.

One of the meals towards the end of the novel featured Chinese take-out.  I decided to prepare two dishes, non-take-out/better-than-take-out style:  Orange Chicken and Chicken & Spring Vegetable Lo Mein.  For the lo mein, I used soba noodles, which I like and could find in the local grocery store.

I enjoyed both dishes, and would definitely plan to make them again.

Please stop by Simona's blog to see the other entries for this edition of Novel Food! 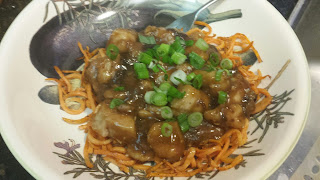 How to make Crockpot Orange Chicken:

Coat and brown the chicken in a frying pan according to the original instructions.
Add the chicken and the sauce mixture to the crockpot, and cook on high for 2 hours or low for 3-4 hours until the sauce has thickened and the chicken is cooked through. 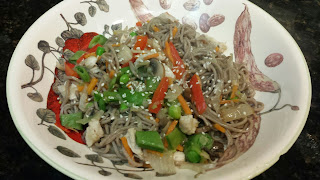 Bring a large pot of water to a boil. Meanwhile, in a large, heavy skillet, heat the oil over medium-high until shimmering. Add the onion, garlic and ginger. Cook, stirring occasionally, until softened and lightly browned, about 5 minutes. Turn off the heat.

Add the noodles to the boiling water and cook according to package directions. Add the cabbage, bell pepper, mushrooms, snow peas and carrot; cook for 30 seconds. Drain the noodles and vegetables thoroughly.

Turn the heat under the skillet back to high. When the onions sizzle, add the soy sauce, sherry and sesame oil and let the mixture bubble for a few seconds. Add the noodles and vegetables; toss well. Cook, stirring often, until the mushrooms are fully cooked and the peppers are tender but still slightly crunchy, about 3 minutes.

Lower the heat to medium, add the chicken and cook, stirring often, to heat through. Season with salt and sprinkle with the peanuts.

Chinese take-out sounds so good. And, then you go and get it and eat it and wonder, "Why did I do that...should have made it at home." :( I have been wondering about this novel.

Both dishes look great (I love soba noodles too!) and the novel sounds intriguing. Thank you so much for contributing to Novel Food :)

Phil in the Kitchen said...

Lovely dishes and the ideal non-take-out food. I'd love them both, I'm sure, but right now I'm really craving that orange chicken.

Thanks for sharing these two recipes! I love Chinese food but invariably find that the take-out versions taste better than my own attempts at home-made. Will give these a try though because they look like just the kind my husband and I would like. And, I too am a mostly non-fiction reader, which I why I love Simona's group, where I find books I wouldn't have thought of to read/enjoy.

I was trying to remember what this group is called! I so wanted to join this time round. Your Orange Chicken looks and sounds so delicious, Judy!

After study just a few of the weblog posts on your web site now, and I really like your approach of blogging. I bookmarked it to my bookmark website record and will probably be checking again soon. Pls take a look at my web site as well and let me know what you think. casino games