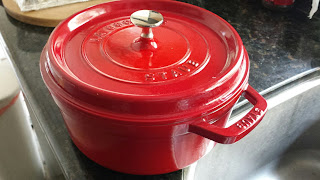 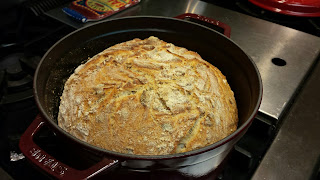 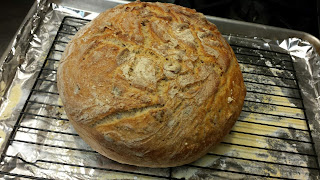 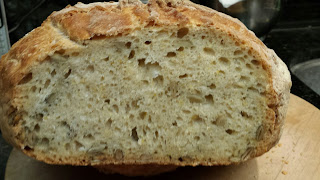 It's true, this was a bear of a bread to make. I love that you did use your dough hook and it still came out beautifully holey and high. Nice crust, too. I think each of us took our own route on this one but the results have been impressive.
BTW, your like to my site is for the Bean Bread. Is it possible to change it to just the site URL? On posting day that will usually get folks to the BBB recipe. http://feedingmyenthusiasms.blogspot

I am blown away at how gorgeous your final loaf is after all of the issues!

I seriously want one of those Dutch ovens! And your loaf, despite being slack dough, turned out perfectly gorgeous!

I really didn't know just how difficult this bread was going to be. I'm also sorry that you didn't know about the changes I made. (Really, I forgot to say to use pepitas in the first draft of the recipe? How could I be so foolish? The pepitas are the best part!)

And well done, you, for persevering! Your Dutch oven turned the mess into a brilliantly beautiful loaf! (I still think that my first failure loaf, that oozed pretty much like yours, would have been fine if it had stuck almost irrevocably to the brotform.)

That is exactly what I did Judy, when my polenta was added and it all turned to soup... I even used the flat beater in my machine to get it going and lots of flour. I love love love that red pan, I love the staub over creusets... just a personal thing I guess (that's why a Staub is in the label as well). Beautiful bread in the end, well done!

I'm not certain which I like more - your bread or your Dutch oven.... Both are gorgeous!

This was a challenging bread, but oh so worth it! Your loaf looks great! My starter took a while to get going as well. It was very cold in my kitchen. My leavener never did float but it evenso it performed admirably. 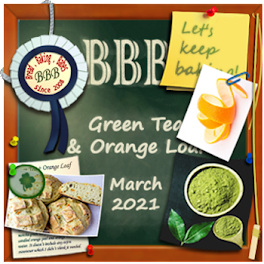