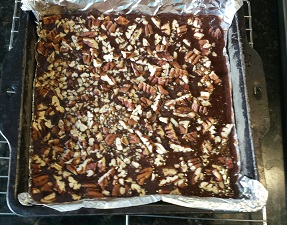 This recipe can be found in Dorie's Cookies on pages 42-44.  Take a look at what the other bakers did this week by going to the Tuesdays with Dorie blog.
Posted by Judy at 4:23 PM

It sounds like it was quite a baking adventure. Luckily it is how it tastes and not how it looks. I am sure they were delicious.

oh no! i'm always squeezing things into my over crowded fridge and hoping they don't topple. sounds like you were able to fix the situation nicely.

What a hoot! Baking adventures indeed!

I'm glad the topping was self-correcting! I loved these and they were so delicious I didn't care how messy they were.

I enjoyed reading about your experience making these cookies. You have a nice voice.