A is for August.


A is for Aggravating.


I'll be glad to see it leave, Blue Moon notwithstanding.


On August 1, I accidentally fell, landing on my left wrist.  It was unusable for over 2 weeks.  Now, on August 31, I can actually lift a frying pan again, although there are some strange lumps remaining.


That's how the month began and it didn't get much better.    I missed the french bread baking event because my wrist wasn't up to kneading.

I did manage to make my swirl bread, though, for this month's Bread Baking Day.  That's because the dough was already made -- the other half of the french bread dough from the previous post. 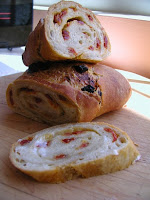 I rolled out the dough flat, then layered it with some diced sun-dried tomatoes and topped that with grated Parmesan cheese.  Definitely, a yummy combination. 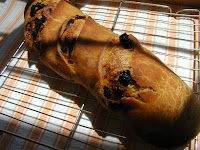 So, I'm sending this over to Shelley at C Mom Cook.     She's the hostess this month for Swirly Breads.  The most difficult part was deciding on the flavor of the swirl, so it will fun to see what the other bakers chose for their swirls.


Also, be sure and stop by Zorra's website to learn about all the previous Bread Baking Days and see some fantastic food. 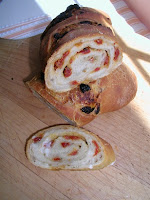 Here's hoping September is a more friendly month.   I'm looking forward to resuming my baking and blogging.
Posted by Judy at 8:11 PM

I love swirl breads! This looks so tasty! Hope your wrist gets better, I can see why you are anxious to see August leave

Glad your wrist/hand is better. Not a happy time if you bake/cook. Bread is lovely. Love swirled breads.