Will the real Poilane come forward

This month the Bread Baking Babes tackled the poilâne-style miche from Peter Reinhart’s Bread Baker’s Apprentice. While I’ve made more than half the recipes from that book, I hadn’t yet made that particular bread.

I had a slight head start because my starter was happily bubbling along, so my first step was to create the barm. Wow. That mixture really took off, which got me all excited. Closer to the final result now, I made the firm starter, which was successful as well.

Then, I reached the actual bread stage. The dough rose, then I created 3 boules and laid them in proofing baskets. Because it was late, I put them in the refrigerator to retard overnight. The next day, I removed the baskets and let the boules warm up for the final rise. Well, after 6 hours there was nary a bit of movement. Nada. I pondered why this happened, since all was proceeding normally up to that point. I baked them anyway, even though I knew instinctively that they would fail. And, they did. If I threw one of these loaves at you, and it hit you, you would drop dead. A healthy murder weapon.

Now, there’s nothing more frustrating for me than having a bad bread-baking experience, so after checking with Mary aka Breadchick, I proceeded to plan B.

Several days having passed, I removed my big bowl of barm from the refrigerator to let it warm up. Luckily, it was still very much alive. Rather than create the firm starter, I skipped that step and went directly to Go, putting the luscious barm into the whole wheat flour/salt/water mixture. I kneaded this by hand since my industrial-strength KA was being a bit contrary, then put it in the proofer to rise. Which it did beautifully. Then I divided it into just 2 boules this time, and they also rose nicely, in just about an hour.

This time the bread was a success. Who knows why? I’ve used a firm starter before, but this time it just failed to perform. And, actually, I like the feel of putting the barm directly into the flour mixture. There is still barm remaining, so I plan to make another related recipe from Reinhart’s book.

So, after two attempts, I will send the results over to the BBBs for their perusal. The Kitchen of the Month for May belongs to Sher of What Did You Eat?, so be sure to check there for all the instructions.


Then I'll figure out what to do with the killer loaves. 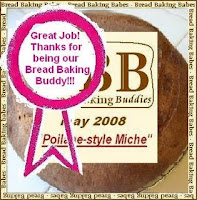 Yea that was really strange because I retarded the loaves just the other day from a firm starter.

Just one of the wonderful things that make baking bread part science and mostly artform...

Wonderful job on the miche!

I just found your e-mail, where it had been dumped into the spam folder, along with another person who made the bread. I apologize and will put your beautiful bread in the recap immediately. This has been a terrible week with my computer--actually the server.

So sorry, and I hope you keep joining us in the fun. My starter was really sluggish (not the seed culture). But, it was fine when I incorporated it into the flour for the bread. This was a very strange starter! Lot's of personality.

The Science and Art of bread making do come together in strange ways!
Killer loaves, I've had a few come out of my oven also;))
Thanks so much for baking with us!!

What are you favorite formulas from BBA? I keep making the same things from it and I'd be up for trying new suggestions.

Yes this is a strange starter, it seems to do nothing and when you use it, it can lift a mountain...
Great loaves!!! Thanks for baking with us.