Back in September, Zorra (1x umrühren bitte aka kochtopf) invited all breadbakers to participate in the 2008 World Day of Bread, which is October 16. The original World Bread Day was created by the UIB International Union of Bakers and Bakers-Confectioners. They wanted to provide an opportunity for anyone to learn and talk about all things bread – bread itself, the bakers, the history, and the importance of bread in our lives, past, present and future.

I learned to bake bread as a sophomore in high school, a long time ago. I haven’t stopped baking since that time, and it wouldn’t be wrong to say that baking bread is my most favorite activity, especially yeast breads. There is something magical about the hand-to-dough physical contact and the satisfaction of taking a living entity and transforming it into a tangible, delicious product.

Early in 2007, I discovered a bread recipe that has become my all-time favorite. I’ve written about it before, but for this special event, I decided it was the perfect bread to make – Sourdough Rosemary Raisin bread. All I was given, originally, was a list of ingredients and their proportions, and it was up to me and my know-how to combine all those ingredients and produce a flavorful loaf of bread.

I have scaled down the original recipe – quartered it, actually. It is possible to double or even quadruple the amounts if you have a large-enough stand mixer. What follows is the recipe I was given.

That’s it. You may now go forth and make bread.

But, for those who might desire some further instruction, here’s what you do.

Using the dough hook, mix at low speed until all the ingredients are moistened and combined. Turn off the mixer and let everything rest for about 10 minutes. Resume mixing with the dough hook until you have a smooth, satiny dough. This could take anywhere from 10 to 15 minutes.

Remove the dough from the mixer and place on a lightly floured board. Manually knead the dough for the last few minutes until it feels just right. That takes experience, but the dough really does feel satiny smooth. Place the dough in a lightly greased bowl, cover, and let rise until double. The time will vary depending on how warm the day is.

When the dough has doubled, gently remove it, and divide it into two equal pieces. Form each piece into a ball and let the dough rest for 5 minutes. At this point, you can shape it however you wish, into batards, boules, loaves, rolls, etc. Place on a parchment-lined sheet pan, and let rise until nearly double. This will probably take less than an hour, maybe 45 minutes.

Remove from the oven when finished, let cool for about one hour, then slice and enjoy.

I believe that if everyone baked their own bread and celebrated World Bread Day, there would be peace on Earth. Thanks, Zorra, for sponsoring this event. Follow this link to see all the wonderful breads that were entered for 2008.

And check out Susan's tribute to weekly bread baking, YeastSpotting.

I'm really impressed that you took ingredients and ratios and just went with it - that takes dedication! It looks like a wonderful and tasty loaf too.

I've never thought of combining rosemary and raisins but it looks and sounds delightful, and the rich crust color is just beautiful.

Why not combinig rosemary and raisins, sounds good, looks beautiful!

oh gosh i dont have the patient like yours making bread, I am bad for that! ,lol!

I find the thermometer measuring the internal temperature so much more reliable than the thumping for a hollow sound!
Gorgeous color. The rosemary and raisin would seem a compliment in sweetness.

Rosemary and raisin? Quite an interesting combination.

I am so impressed that you could just take ingredients (without directions) and make bread.

I hope to one day get to your level of expertise in regards to baking. I would love to just take a formula and make bread w/o having to read directions!

One can see that you are a chef baker!

Thx for your participation in WBD'08. 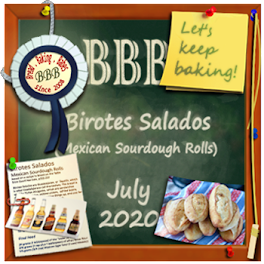