There’s a new challenge out in blogland, started by some of the fine baking ladies at Tuesdays with Dorie: You Want Pies With That? Now, who doesn’t love pie? It has to be my favorite dessert of all. (I’ve been known to bake pies rather than cakes for birthdays.)

Each month there will be a specific theme. For October, the theme is “I Love that Movie!” Well, there was no doubt in my mind which movie I would choose. Who can forget the infamous/famous Potzdorf pie fight in “The Great Race,” starring Jack Lemmon, Tony Curtis, and Natalie Wood? After Prince Hapnick is bombarded with pies, he pauses, gives the pie debris on his face a taste, then says, delightedly, “umm, brandy! Throw more brandy!” 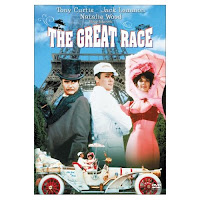 So, in honor of Prince Hapnick, I made a Brandy Alexander Pie (actually two mini-pies) with a graham cracker crust. It’s great for a hot day since there is minimal cooking.

Filling for a 9 inch pie crust of your choice:

Instructions:
Sprinkle gelatin over cold water in a sauce pan. Add 1/3 cup sugar, salt and egg yolks. Stir to blend. Heat over low flame until sugar and gelatin dissolve. Remove from heat. Add liquor and chill until mixture starts to thicken. (Don't let it get too thick or the egg whites and whipped cream won't blend evenly.) Beat egg whites until stiff, adding 1/3 cup sugar. Fold into thickened mixture. Whip 1 cup cream until stiff. Fold into pie filling. Garnish with the other cup of whipped cream, if desired. Chill for several hours or overnight.

For the crust, I crushed enough graham crackers to make a generous 1/3 cup, then blended in 2 teaspoons sugar and 2 teaspoons butter. I pressed the crumbs into two tart dishes, then baked them for about 9 minutes at 375°F.

Throw more brandy indeed - I think I'd be saying that if they were flinging that pie :) Sounds delicious.

Great pie! And such a perfect throwing pie too! :)

Brilliant! Brandy Alexander Pie! And, as you know by now, I chose the same magnificent movie. I must get that DVD, now that I think of it.

I almost chose this movie too!! What a great looking pie!

I've never had brandy Alexander, but it sure makes a fine pie!!

Brandy + throwing! I love it!

Cool! I have never seen this movie - but your post made me laugh!

I really need to see this movie. I had never heard of it before, but have seen it twice today!

I haven't seen the movie but your pie sounds perfect for it. Great job!

Ooh, I want to bake one and throw it at someone!
Kidding, I would probably eat it all myself. Great pie!

Great pie and movie choice! It is always great to have a dessert you can make on a warm day!

Great pie idea! I LOVE that movie! I used to watch it over and over! I can tell I'm going to have to rent it soon.

Mmmm, that sounds REALLY good. I've recently fallen in love with brandy in baked goods, so I definitely want to try this.

I totally started to bust out laughing when I read your post - I love that scene! It's hilarious :) You crack me up! And your pie looks fun and creative and like a winner!

Oh, yummy! And I love Natalie Wood. I need to rent this one.