My daughter and I are big fans of homemade pudding, so when Melissa of It’s Melissa’s Kitchen chose Dorie’s chocolate pudding as this week’s TWD selection, we were ready to give it a try. I’ve been making homemade pudding for years. Call me a purist, but nothing beats the flavor of homemade, plus there are no additives or colorings. Just the pure flavors.

So I didn’t give this recipe a second thought until someone mentioned the word food processor. What? Food processor? For pudding? I decided to read the recipe (always a smart move), and sure enough, the instructions had you dirtying a bunch of pans and a food processor. Good grief, why? Pudding is not that complicated, and certainly doesn’t require a food pro. So, excuse me this time, I did not follow the rules.

First, I took out my most favorite pan in the world – my saucier. It’s just the thing for any sauce-like concoction for there are no corners! If I had to rescue one pan in an emergency, it would be this one.

Next, I prepared my mise en place. All dry ingredients measured out; all wet ingredients whisked together; butter cut into small cubes; bittersweet chocolate finely shaved. (Aw, don’t you just hate hairy chocolate?) Oh, and the cocoa I used was extra dark. This pudding was going to be chocolate-y.

So, all the dry ingredients were poured into the saucier and whisked together. Then, the wet ingredients were blended in. The burner was turned to medium and I proceeded to whisk gently. You can tell when the mixture is just about to thicken – that foamy surface suddenly changes texture and starts to disappear. At that point, you need to pay close attention. As soon as the pudding had reached that stage, I turned off the heat and began whisking in the softened butter cubes, the shaved chocolate, and finally, the vanilla. End result? Perfectly smooth, luscious chocolate pudding with only one dirty pan. 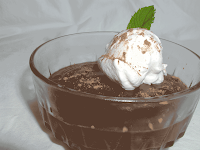 My daughter said the pudding was good, but not as good or rich as my normal recipe. (Note to self: try to remember which one is my ‘normal’ recipe.) I thought it was delicious, and that it tasted even better the next day, but it could be that I just like chocolate pudding, no matter what. ; )

So, thanks to Melissa for a great choice. I’m looking forward to seeing how the other TWD bakers fared.

I'm going to try the hand blender next time (or maybe just my arm muschles...or lack thereof), but I thought I should do it Dorie's way this time since it was my recipe!

And see I made it just to use the food processor since I had never made it that way.
Looks good.

One dirty pan...my kind of pudding recipe! I used my stick blender in the saucepan and had good results. But a whisk would provide more of a workout. Beautiful pudding!

See, if I mise en placed, maybe my kitchen would be less hectic when I baked... And only one dirty dish? Awesome.

I am lusting after that pan. No corners? Yesssssss.

I love your saucier - that's the next thing I want to get for our kitchen. Your pudding looks great!

After reading your post, I realized that I should have followed my instinct and made it the same way you did! Why make a mess if you don't have to?

I had to laugh, though - your daughters comment reminded me that I can't always remember which recipe I used. Does that mean we have too many?

looks great Judy...mine came out SO rich but I used 2 chocolates and an irish cream liquer...tasty. i also just used one bowl, whisk by hand since i do not have a FP. came out fab!

I must have such a pan!

I'm glad to see that you had such success making the pudding this way. One dirty pan is definitely a good thing!

what a great pan! i will have to put it on my wish list :) the pudding looks delicious!

one pan?? too smart of you!

I love the saucier -- I'll have to find one of those. And it was brilliant using only one pan. I made it as written, but next time I might give the one-pan method a shot (if I acquire the right pan!).

Love the saucier, good for you for only using one pan. My kitchen was a demolished mess by the time I was done! Pudding looks delicious!

Looks great. Your pan is beautiful.

I skipped the food processor too. I'm sure it made the pudding smoother but I'm all for skipping unneeded steps. your pudding looks delicious!

I bet there was nothing left...looks delicious! And right from the pan...awesome!

Love your one-pan method and your pudding looks wonderful!

My sweet husband found a large saucier at TJMaxx and we both love it! (He cooks too, in fact, he does most of the "everyday" cooking.) We have never seen another one there, though. We're now searching for a smaller saucier.

Your pudding looks great! Look forward to you post next week and glad everyone liked the pudding!

Remember the chocolate brownies? I'm convinced that when Dorie plays with chocolate, she likes to use every dish, spoon and tool in the house. :)

I need a saucier. Lovely pudding! 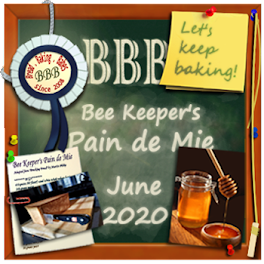