For this month’s bread bake, I am channeling my inner Nailed It! artistry and abilities.

Never heard of Nailed It!?  It’s a reality cooking show (on Netflix) where three home bakers are challenged to reproduce beautifully decorated cakes and confections.  While the contestants believe they are skillful bakers, their results prove otherwise.

As the January Kitchen of the Month, Elizabeth, of Blog from Our Kitchen, shared a recipe for Elbow Lick Sandwich Bread, which contains delicious ingredients like caramelized onions and sweet potato puree.

Because my 2018 bread-baking track record was a bit on the dismal side, I hesitated to try this one.  But in the spirit of Nailed It!, I decided to give it a hearty try.

First, came the caramelized onions.  After two hours of low and slow on the stove, the onions were done.  Looked pretty tasty and smelled great.  Next, came the sweet potato puree, which, in truth, was actually pumpkin/squash puree from a can.  Leavener/starter was mixed and placed in the cold oven.

Have I mentioned that it’s winter here in southern California?  It’s been rainy (yay!) and a bit on the chilly side – 50s to 60s.  While that might be balmy elsewhere, it translates as cold here.  You also need to know that my German Shepherd dog is afraid of the heater (scary noises), so the inside of the house is about 61 degrees most of the time.  Not conducive to yeast or bread-rising functions.

New day.  In spite of my misgivings, I continued with the bread.  I carefully weighed out the ingredients and mixed them together as per instructions.  After resting (both me and the dough), I began adding the onions.  A few red flags went up when, after adding all the onions, the dough still resembled a batter.  Next, came the two-hour initial proof.  Check:  all is well.  Following this, the dough was to be gently shaped and place in a well-floured brot-form for the next 3-4 hour rise.  Upon observing the dough (still batter-like), I knew there was not enough flour in the Universe to keep it from sticking to the brot-form, so I made an executive decision and poured it into a 9x5 loaf pan, ready for the final 3-4 hour proof.  (Pour is a critical word.)

After one hour (1 hour), the dough was already over-proofed, even in this cold house.  I heated up the oven, gently placed the jiggly dough inside, set the timer, and walked away.   After 35 minutes or so, I removed the bread, which easily slipped out of the pan onto a cooling rack.  (It could possibly have baked another 10 minutes or so, but I was too eager to try it.)

Sliced, toasted, and buttered:  it is delicious despite its appearance.

But, the bottom line?  I Nailed It!

(If Nailed It! ever adds a bread challenge, I plan to audition.)

For the recipe, head over to Elizabeth’sblog.  To see what the bread is supposed to look like, visit the other Babe’s blogs.
Posted by Judy at 5:21 PM

I think your toast looks awesome! I am definitely doing this one is a loaf pan next time.

I have not seen that show, but you definitely nailed it!!

This is the most brilliant post!! You. Nailed. It!

I feel your pain about the cold. I think it might be up to 60F in our century home. Maybe.

I also feel your pain about how much flour to use on the brotform. I used a fair amount of rice flour. Mercifully, most of the bread released itself from the basket. Most of it....

Late last night, when I got home, I peeked in to read your tale of woes and (I hope you don't mind) I could not stop laughing and had to press my hands over my mouth so I didn't wake anyone up.

I'm so glad that the toast tasted fine at least.

You definitely nailed it Judy! Woohoo! You get the prize just for spending 2 hours caramelizing your onions. It's no wonder mine were too moist. I really like the loaf shape. Definitely need to try that.

I'd say you nailed it far better than any of the contestants. Looks fine and tastes great...what more could you ask for. The pourable dough works great, obviously, in a loaf pan. I ended up adding lots more flour. Love yours better than any Nailed It creation!

My dogs are always afraid of new noises. Right now they are afraid of new dog beds....
Great looking bread - glad you tried it - and Nailed It! 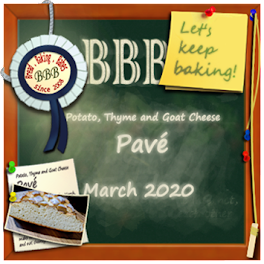