Or, pull-apart bread, if you will.  Interactive bread is much more fun to say and do.

This month’s recipe was provided by Kitchen of the Month, Elizabeth, from Blog from Our Kitchen.

While the original recipe called for wild sourdough starter, I was, sadly, unable to comply.  The starter that began in March met its untimely end in early August with an attack of the pink funkiness.   Care and feeding of a new batch just didn’t seem economically feasible for just one or two tablespoons, so I opted for a yeast-based version that I found on the King Arthur Flour website.

I also steered away from cutting out circles, in the interest of time (which is precious little lately), and did a strip and stack method.

Overall, I’m pleased with the outcome.  I’ve been wanting to make this style of bread for quite a while now, so I didn’t want to pass up the chance.  A very minor issue occurred when I took the bread out of the pans:  the loaf began falling apart, section by section.  That didn’t affect the taste, of course, which is delicious.

If you’re looking for a fun bread to make, please give this a try.  You can find Elizabeth’s recipe on her website, or use the same one I did from KAF.  Either way, it will be delicious.

Stop by the other Babes' websites to see what they did.

Mine thought about pulling apart by itself in the middle as well. ;) I definitely like the strip and stack method too. Love the beautiful color and fanning you got in your stacks!

I do wish I'd thought of using the "strip and stack method"! (I keep wondering if the fact that rolling out the circles is the reason that my pull-apart bread didn't rise very well.)

My bread fell apart into 4 pieces as well. I pinned it down to it being over-baked. I guess not. It appears to be a feature of this bread.

All the circles would have been crazy for me.... Stacks much better and bread is lovely

You got such a beautiful golden color, so perfect. Whatever you call it, pull apart is just good. 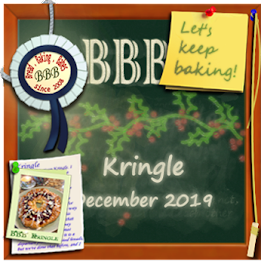